No matter which brand you decide to go with, the basic differences between each “level” within each manufacturer is generally the same. That being said, there isn’t a clear cut “line” when it comes to what you always get when jumping to the next better model within a particular manufacturer. Some will upgrade the remote, maybe improve the range, have additional auxiliary inputs, etc. I will use Directed Electronics products as examples as that is the line I am most familiar with, and use remotes as identification to differentiate different “levels”. 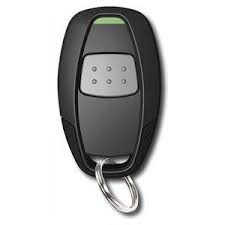 When you see a remote with only a single button, it’s generally a good indication that the unit is fairly basic. It will either be a keyless entry unit, or a remote start. These units typically will have a range of ~250ft or less. Usually less as most of the time these units only have an antenna “tail” that is a piece of wire attached to the side of the unit. Believe it or not, I’ve had customers come in where the remotes only worked about 3-4 feet from the car, even after a fresh battery change! But that’s not to say they are all bad as in recent years several one buttons have grown windshield mounted antennas which DEFINITELY helps. One example of these is the Avital 4113. On units that are remote starts, obviously one press of the button will start and one will stop. However, on models such as the Avital 4113 and Python Responder One, an “unlock while running” is available. Once the vehicle is remote started, a press and hold for 1 sec will allow the vehicle doors to be unlocked. One buttons will flash the parking lights as a visual confirmation of door lock operation or remote start activation. On models that are remote starts, runtime is usually fixed between 12min-15min and not changeable. No other options/features usually are available. 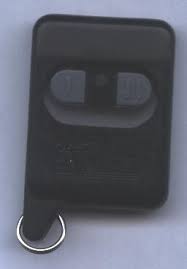 Obviously a step up from the one button, most of these are the more traditional remotes you see, with one button for lock, and another for unlock. Some lower quality units still use an antenna tail instead of an external antenna on a model like this. Because of the type of antenna, the range is still around 250ft. Models that are keyless entry/remote start, you would use either button for lock/unlock, and then press both down for remote start. Two buttons will flash the parking lights as a visual confirmation of door lock operation or remote start activation. On models that are remote starts, runtime is usually fixed between 12min-15min and not changeable. No other options/features usually are available.

This is where most manufacturers tend to focus when developing new technology, adding new features and where the most flexibility and expandability exists.
Three buttons tend to be the first time a trunk pop channel appears on a unit. On keyless entry/security units, you usually have one button for lock & unlock / arm & disarm, and another button for trunk pop. On units that are remote starts, lock/unlock are combined on one button, remote start is usually designated by an astrix*, and there is a trunk pop button. Range usually increases to 500-1000ft, and remote start vehicle runtime is adjustable from 10min-60min.
Four buttons tend to be the first time where the dedicated trunk pop button is replaced with an “AUX” button. While this button can certainly serve as a trunk pop, it can also be used to trigger a rear window defrost. This is also where additional aux channels are available to power/trigger other modules such as window automation, neon lights, etc. Usually these additional channels can be triggered be pressing the left two or right two buttons simultaneously. On remotes that have 5 buttons, the additional button could be a designated siren/panic button, an additional aux channel, or even the remotes own power button. These upper end, “regular” remotes also extend range to 1500+ft
Now these units are also available with two way capabilities, normally reserved for remotes with LCD screens. Commands from the remote are confirmed by the unit and sent back to the remote, causing LEDs to light notifying the user that the command was executed successfully.(Door lock operation, remote start on/off, trunk pop) On units that have built in security, alarm will emit a warning tone should the alarm be set to full trigger. 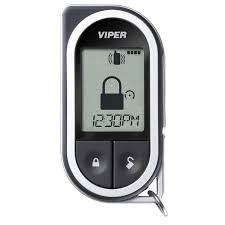 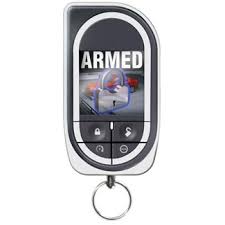 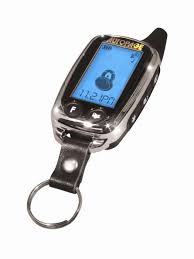 Everyone’s favorite! There have been a few remote start/keyless entry units that have an LCD screen, but we have seen most manufacturers move away from having a remote start/keyless unit with an LCD, as most information can be conveyed to the user via LEDs. Some of the more affordable units still use remotes with a passive matrix style screen(think calculator, hand held games from the late 80s early 90s) that has a picture of a vehicle, and small other pictures illuminate to confirm or notify the user of the unit’s functions. Newer units have a more advanced, active matrix type LCD screen where the picture on the remote actually changes as commands are sent and received.(Like moving graphics on car stereos) Most of these units are identical to the upper end 4/5 button remotes, they just have upgraded remotes.

What are some of the more respectable brands?

Products put out by Directed, Autopage, Compustar, Scytek tend to have a good balance of quality and features, dealers generally can get good support from them should the unit turn sour, and replacement parts are widely available.

This is a very high level explanation of basic differences between units of various manufacturers, using the remote to visually differentiate. Some manufacturers give more “bang for the buck” features than others, but the quality of some units may be sacrificed.
Share
Share Tweet +1